Categories
Pages
Home » In The News »

**Most accounts from the United States or representing large companies/organizations such as @InmanNews (#2) & @MSNRealEstate (#18)!

“Social media is, undoubtedly, very important these days for professionals in all fields and REALTORS® are no exception. Twitter is an important social network with many members in various countries and, when deciding who to follow, it is important to choose accounts that are constantly updated with interesting and relevant content. Listed below are 100 accounts of realtors and information sources for realtors. The selection is based on users’ influence and their activity on this micro-blogging network.”

To stay up to date with Ashley’s tweets, follow @Ashley_Realtor!

“B.C. REALTORS® embracing social media and the web to stay ahead of the pack” 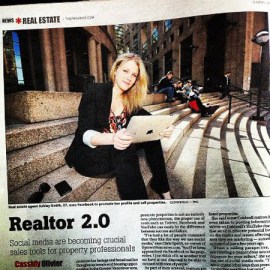 When Ashley Smith, a 27-year-old REALTOR® in Vancouver, gets a new listing she tweets out the details to her followers and posts the property’s profile on her Facebook Page.

And shortly, once her new website is up and running, Smith, who previously worked in the Langley/Surrey property market, will also run a blog to promote her listings and broadcast her thoughts on trends and housing opportunities in the Greater Vancouver area.

A few years ago, a For Sale sign on the property and some New Listing flyers dropped on the doorways of neighbours might have sufficed. But today’s consumers are better informed, connected and tech-savvy. And they expect the same from their realtors.

Which is why today’s realtors, the 2.0 version of you will, are embracing social media tools like Twitter, Facebook, blogs and YouTube to not only market their listings, but reach out to potential buyers and sellers.

It’s all about having a strong web presence and creating a buzz to complement a solid ground game.

“Before anything happens, people go online and look for it,” says Nermin Hadzikadunic, owner of FindMaster Marketing Inc., a Vancouver company that provides marketing advice to realtors.

“So if you don’t have an online presence, you are already behind the eight ball.”

While the use of social media tools to promote properties is not an entirely new phenomenon, the proper use of tools such as Twitter, Facebook and YouTube can easily be the difference between success and failure.

“I’ve had a lot of people comment that they like the way we use social media,” says Chris Spotzl, co-owner of UptownVancouver.com. “And I’ve been approached via Facebook to list properties. I just think of it as another tool we have at our disposal to be able to connect with tons of people.”

Use of social media can also attract more eyes and create the desired snowball effect for hot properties, he says.

“I strongly encourage my clients as well to share what we post onto their Facebook page as well,” he says. “You want it to catch on. You want to share it so it gets out to more people.”

As part of their arsenal, realtors are also now expected to be able to provide their clients with things such as virtual video tours (often posted on YouTube), something now considered standard. Also standard is a website, or two. But any old website won’t do.

Hadzikadunic said it is also about employing search engine optimization techniques to ensure that your site is the one that pops up when clients come looking. For perspective, a Google search of Vancouver Real Estate Agents produces over seven million hits.

“If I’m looking to buy a property in Coquitlam and you specialize in properties in Coquitlam, I should be able to find you,” he says.

She said some Coldwell realtors have even taken to posting informational videos on Coldwell’s YouTube channel that serve to educate potential buyers on the topics and issues affecting the area they are marketing — something unheard of just a few years ago.

“From a selling perspective, you are creating a tremendous amount of exposure for your sellers,” she says of the use of social media tools. “There are so many other ways than promoting properties now than just print.”

While For Sale signs are still part of the traditional sales effort, Cameron notes that even these have changed dramatically. Additional headers on a sign can now include a QR code for Smartphones and text message number that provides clients with additional info.

While John Geha, president of Coldwell Banker Canada, says this strategy is headed for Canadian markets, he’s quick to note that technology and social media tools can only go so far.

“As much as technology has made us more efficient and has been able to deliver information at a very fast pace to the consumer, it still boils down to the relationship,” he says.

Which is why Smith, the 27-year-old REALTOR® from Vancouver, says she’s careful not to overuse her Twitter and Facebook accounts to push listings.

In fact, she says the greatest advantage of using social media is to connect with potential clients and other professionals in the field.

“I like to be present,” she said. “But you know, I would say bombarding people with just your business stuff, it does annoy people now more than ever because more and more realtors and business people are on social media.

“So it is about connecting and reminding people what you do without being in their face.”